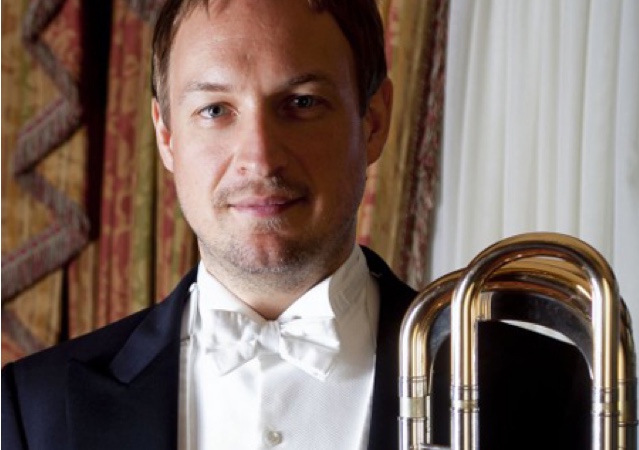 Mark Gaal, born in Vienna on September 11, 1978, grew up in Oberwart and from the age of seven years attended the central music school there, receiving lessons first in tenor horn and after that in trombone with Gerhard Imre. As of 1992, he studied trombone at the Oberschützen campus of the University for Music and Performing Arts in Graz with Erik Hainzl and attended the Evangelische Oberstufenrealgymnasium, a five year music high school in Oberschützen, where he received his matura in 1997. In 2000, following numerous first prizes at “Jugend musiziert”, he attained the First Concert Diploma with distinction. Master classes and seminars with Dietmar Küblböck, Joseph Alessi, Otmar Gaiswinkler and Carsten Svanberg, along with numerous engagements as a substitute for various Viennese orchestras augmented his studies. In the year 2001, he was hired as a bass trombonist with the Lower Austrian Tonkünstler Orchestra, and in 2002 he auditioned successfully for the Vienna Volksoper as tenor and bass trombonist. On September 1, 2007, he began his service as a tenor trombonist with the Vienna State Opera Orchestra.

In addition to his work in the orchestra, Mark Gall is also a member of the Vienna Trombone Ensemble as well as the “ensemble xx. jahrhundert”, and appears with the Vienna Chamber Orchestra, the Ensemble Kontrapunkte, the Clemencic Consort, the Pierrot Lunaire Ensemble Vienna, the “Musikwerkstatt Wien” and the Vienna Pocket Opera, all of which serve to underscore his wide musical interests. Since 2007, as an assistant to Dietmar Küblböck, he has pedagogical responsibilities at the University of Music and Performing Arts in Vienna.