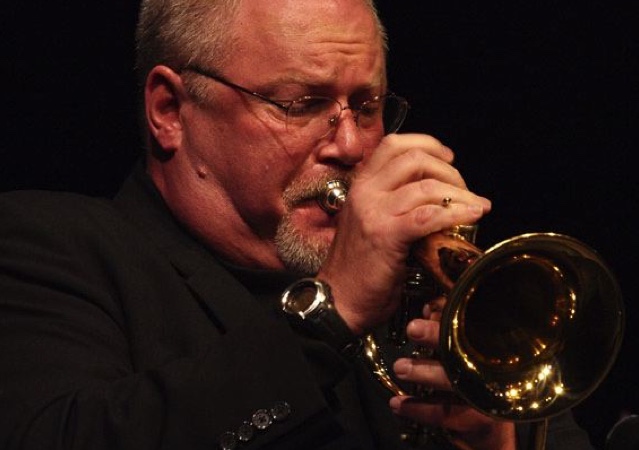 Chris Jaudes is currently playing lead trumpet in the Broadway revival of HAIR in New York City. He was recently cited in The Wall Street Journal and The New York Times for his outstanding trumpet solos in the Broadway hit production of Gypsy starring Bernadette Peters.

A much sought after lead trumpet player, his other Broadway shows include LoveMusik, How the Grinch Stole Christmas, Flower Drum Song with Lea Salonga, Gypsy and Annie Get Your Gun with Bernadette Peters and Reba McEntire, Ragtime with Brian Stokes Mitchell, On The Town, Sunset Blvd. with Glenn Close, Steel Pier, CATS and Peter Pan with Cathy Rigby. He has toured with Evita, Peter Pan, The Music of Andrew Lloyd Webber, Ron Kenoly and South Africa Rejoice.

Chris can be heard on the Grammy award winning albums of Annie Get Your Gun and Gypsy as well as cast albums of Flower Drum Song, Ragtime, Sunset Blvd., and Steel Pier. Chris also has a solo recording with The New York Staff Band.

Chris has been a featured soloist throughout the United States and around the world. His versatile playing abilities have given him opportunities to perform with The St. Louis Symphony Orchestra, The New York Philharmonic Orchestra, Oklahoma City Symphony, New Jersey Symphony, Carolina Pops Orchestra, as well as with a number of ensembles in the New York area including lead trumpet with the Birdland Big Band. He has performed as a soloist at the New York Brass Conference, The International Trumpet Guild and the Brass Arts Festival in London, England.
Chris is honored to be a member of The Brass Band of Battle Creek, the premier brass band in the United States, and has been featured soloist and clinician at the 2006 International Women’s Brass Conference, the 2006 National Trumpet Competition and 2008 International Trumpet Guild Conference in Banff, Canada.

Chris serves on the faculty at the Juilliard School in the Jazz Studies program.

Chris was privileged to have participated in the 2008 International Trumpet Guild Conference held in Banff, Canada where he was featured on a Tribute to the great Maynard Ferguson.