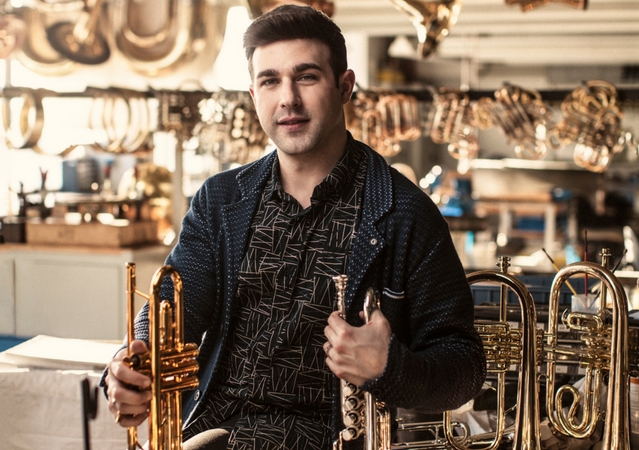 Born in 1985 in Daimiel (Ciudad Real, Spain), Manuel Blanco started studying trumpet at a very early age at the Conservatorio de Ciudad Real with Martin Baeza de Rubio, later continuing under the tuition of José Orti at the Conservatorio Superior de Valencia from which he graduated with the highest honours in 2006. Currently he also receives musical advices from international soloist Reinhold Friedrich, who shares with Manuel’s previous professors a special focus upon both professional and personal preparation.

He began his career winning several Spanish and international music awards, such as Moixent, Calviá and Jeju (South-Korea), but he achieved international recognition upon winning the first prize in the prestigious ARD Music Competition in Munich 2011 (with the best history´s score), a prize only awarded to two trumpet players before Manuel Blanco, of which the first was Maurice Andre in 1963.

Manuel Blanco’s interest in chamber music has brought him leading the Mediterranean Chamber Brass Quintet, winners of the first prize at the International Wind Ensemble Festival in Jeju (South Korea) and the International Brass Quintet Competition in the Lieska Brass Week (Finland), with them has performed worldwide.

In 2017 was released his first CD, Fearless, recorded by DECCA with the Spanish National Orchestra. This album includes works of all music history, from Haydn to Tomasi. The review unanimously praised the wide talent of Manuel Blanco.

Future projects include soloist engagements around the world with symphony orchestras, recitals as well as two premieres commissioned by the National Center for Music, among others.