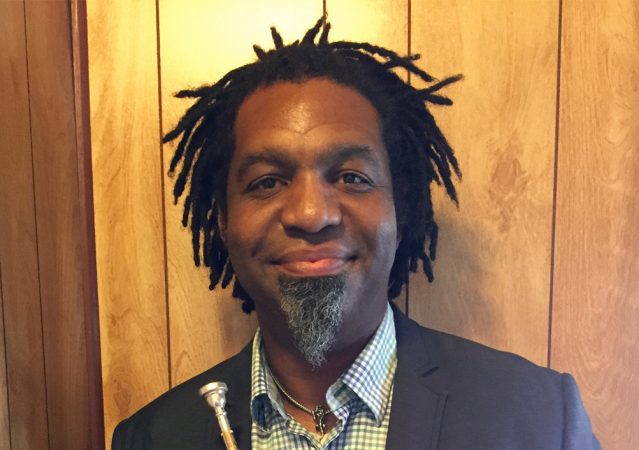 Herbert Smith, Musician – Jazz and Classical, Teacher and composer: Born and raised in Cincinnati OH, he came to Rochester in 1987 to attend the Eastman School of music, where he got his bachelors of Music Education, and ended up staying. Upon graduating from Eastman he acquired the 2nd trumpet position with the Rochester Philharmonic Orchestra and now holds the 3rd trumpet seat. During his stay at Eastman he wore two hats. One as an accomplished classical musician and soloist, the other as a Jazz performer. This proved to be a good move. Herb has been in the Rochester Philharmonic for over 18 years and has performed in Carnegie Hall with the Rochester Philharmonic as well as a soloist on a recital in Carnegie, the year 2008. He regularly plays with the Buffalo Philharmonic Orchestra, Chitaqua Institute Symphony Orchestra and the Portland Maine Symphony, as well as being a soloist, and chamber musician around the greater Rochester Area. On the Jazz side of things, he has a CD entitled The Trumpet Shall Sound (2007) featuring his Jazz Quintet playing reinterpreted jazz standards along with original compositions by Herb. He now has a jazz trio entitled “Freedom Trio” which is more adventurous musically, tapping into many different music forms including Jazz, Classical, Indian, and even more popular styles. This group has performed at the Rochester International Jazz Festival for many years, and will be releasing some new music coming soon. As a musician in Rochester NY, he has had the opportunity to play with many notable musicians including, Wynton Marsalis, Doc Severenson, The Ojays’, Aretha Franklin, Al Jareau, and Ben Folds to name a few. Furthermore when Broadway touring shows come through Rochester, he is hired as lead trumpet for shows, including The Book of Mormon, Wicked, Color Purple, and just recently Pippin’2015. Herb’s teaching experience is varied as well, teaching musicians and non-musicians of all ages. He is currently an Artist in Residence for Young Audiences, and the Rochester City School District. He began his Artist and Residence work with the now disbanded Rochester Chapter of the Aesthetic Education Institute. And furthermore, he is a trumpet Instructor at the Eastman School of Music. Herb also does masterclasses and lectures on trumpet technique, endurance and sound production; works with high school bands and Orchestras as teacher and soloist; and teaches private lessons out of his home. As a Composer he has been commissioned to write pieces for Brass Ensembles, High School Choirs, Jazz Ensembles and trumpet Ensembles, all the while composing for his jazz trio. Herb’s composition “The twelve tones of Christmas” for trumpet, piano and voice, was premiered in Carnegie hall in 2008. Recently Herb was commissioned to write a ballet for the Garth Fagen Children’s Ensemble. It was a 6 part work ranging in many styles including Reggae, classical, Jazz and Funk totaling over 40 minutes in length. And he wrote a piece for High School Choir SATB that was premiered in 2014 at The Finney School. Furthermore he was commissioned to write a fanfare for the dedication of a new Auditorium at Our Lady of Mercy School for Young Women.