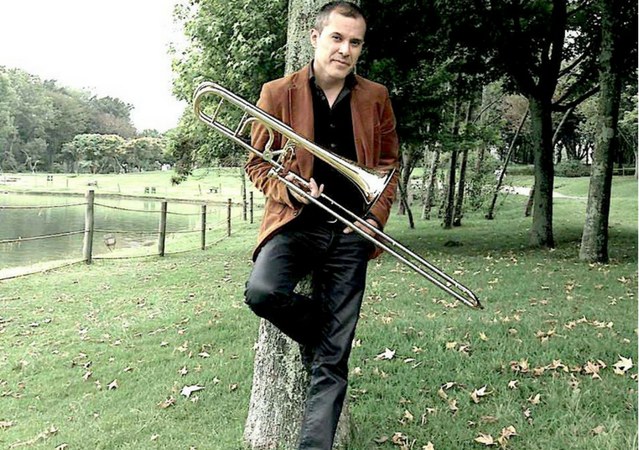 Principal trombone of the National Symphonic Orchestra of Colombia

Giovanni Scarpetta began his trombone studies with his uncle, Professor Germán Díaz, and his theory studies with his grandfather, Luis María Díaz, at the Young Symphonic Orchestra of Colombia, where he played for seven years as principal trombone.

In 1996 he studied at the Hochschule für Musik und Darstellende Kunst “Mozarteum” in Salzburg (Austria), with Professor Friedrich Unterberger.

In 2010, he took a specialization course in interpretation at the Liceu Conservatory (Spain), under the direction of Professor Gaspar Montesinos.

He also has played as solo trombone in Colombia’s major opera, operetta and ballet companies.
In the chamber music field, he has notably been member of the Brass Quartet 37-42B, the Symphonic Orchestra of Colombia Brass Quintet, the Bogotá Philharmonic Orchestra Brass Quintet, the Santa Fe de Bogotá Trombone Quartet, the Colombian Trombone Quartet, ‘4 BONES’, Cuprum Trombone Ensemble (founder and director), Cuprum Brass Ensemble, Cuprum Trombone Duet and the ‘Minstrils of the New Granada’.

Since 2007 he is regularly invited to play and teach at the ‘Trombonanza’ festival in Santa Fe, Argentina. In 2013 he was invited to give a master class and a trombone recital at the Liceu Conservatory in Barcelona (Spain) and at the inauguration of El Sistema’s National Trombone Academy in Caracas (Venezuela). In april 2014, he was invited as a teacher at the UNAM’s (Autonomous National University of Mexico) 4th National Trombone Week in Mexico City, DF. In 2016 was the tenor professor in the 1sth Festival ‘Trombon GT’ in Guatemala City.

Mr. Scarpetta is since 2015 a founding member and the president of the ‘Colombian Association of Trombonists’.
He has represented the Conn-Selmer Inc. brand from 2008 to 2012, the German brand Kromat from 2012 to 2016, A. Courtois in 2016 and actually the B&S brand from Buffet Crampon.

He was a member of the Bogotá Philarmonic Orchestra from 1994 to 2003 as trombonist and euphonist. Since 2003, he is the group leader and principal trombone of the National Symphonic Orchestra of Colombia.