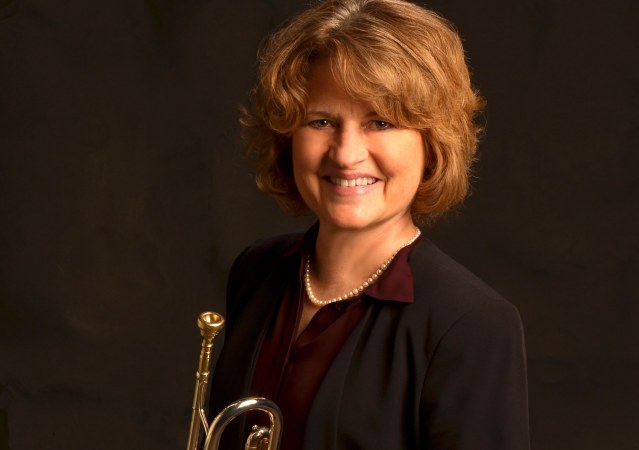 Cathy Leach played Principal Trumpet with the Knoxville Symphony and Knoxville Symphony Chamber Orchestras from 1981-2013, and has been a member of the Toledo (OH) Symphoy, the New Mexico Symphony, the Orchestra of Santa Fe, and the Orquesta sinfonica del Estado de Mexico. She is currently a member of Stiletto, a vibrant all-female brass quintet comprised of outstanding female performing artists from across the United States, and plays Principal Trumpet with the University of Tennessee Faculty Brass Quintet. She is a member of Monarch Brass, with whom she has toured and recorded, and a former member of the New Mexico Brass Quintet and the Galliard Brass Ensemble. Ms. Leach appears on recordings on the Musical Heritage and Opus One labels. Ms. Leach’s trumpet ensemble arrangements are published with Elan Brass Impressions.Cathy Leach is Professor of Trumpet at the University of Tennessee, where she teaches Applied Trumpet, directs the UT Trumpet Ensemble, and coaches small ensembles. She has served the School of Music as Associate Director for Graduate Studies (1999-2003), and as of July 1, 2013 assumed the duties of Associate Director for Undergraduate Studies, while continuing to lead the trumpet studio and teach trumpet. She has received a 2004 School of Music Leadership Award, a 2006 Chancellors Award for Outstanding Teaching, a 2007 James R. and Nell W. Cunningham Outstanding Teaching Award, Faculty Development Awards in 1995 and 2009, and is a Sandra G. Powell Endowed Professor 2014-2016.Ms. Leach’s students are performing professionally and teaching in universities and public schools all across the United States. An active member of the International Trumpet Guild, Ms. Leach is currently on the Board of Directors and has often served as Committee Chair, performing artist, and competitions judge. Under her direction, the UT Trumpet Ensemble has performed at International Trumpet Guild Conferences in 1990, 1992, 1999, 2006, and 2012, often premiering pieces she has commissioned. In 2005, Dr. Leach founded the local chapter of ITG, the Smokey Mountain Trumpet Guild, to help promote communication among the outstanding trumpet players in the East Tennessee area. Cathy Leach performs exclusively on B&S Challenger II Bb and C trumpets